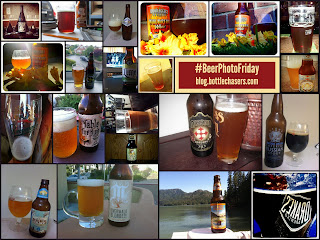 The drinking vessels really stood out for me: the frothy glasses, the stemmed glasses, the iconic beer mug, the Drake's logo glass, and the two Lagunitas mason jars.  I keeps seeing those mason jars every week to the point that I'm starting to really want one!

Kicking Off My Shoes with Beer Photo Friday - June 17

Last Friday, beer lovers were hanging by the pool (@Polyclef), sitting on the green grass (@jessicajrice) , and relaxing on the patio (@John_J_Sheehan, @superflav, @bentwoookie, @hoyle13, @lm9791). 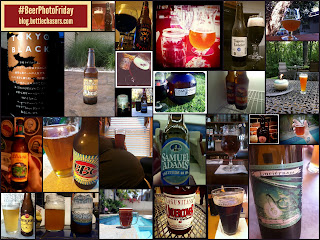 @iheartbarges has us anxiously awaiting the arrival of a baby with weekly pics that include the belly of an expecting mother.  Congrats!


Warm evenings are extremely rare here in San Francisco, so my Friday photo of Sierra Nevada's Southern Hemisphere Harvest was taken inside. However, Saturday was clear and sunny.  I was able to kick off my shoes on Willie Mays Field and drink Lagunitas IPA at AT&T Park at the Genentech Gives Back Event.  Thanks to my friends J and E for the invitation! Check out my pic of Maroon 5 as the surprise headliner. 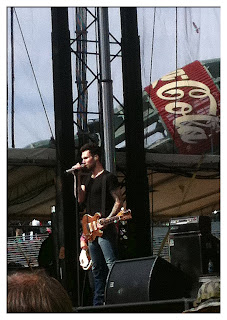 I was intrigued the first time I heard about beer cookies; cookies designed to be paired with beer.  Would they be purely savory? Slightly bitter? More like crackers? In the press release, I learned that I could pick up some South Durham Confection Company's cookies at Fullsteam in Durham, N.C. During my last trip to N.C., I picked up 9 oz. bags of each of their flavors - Curry Spice, Toasted Sesame, and Blue Cheese Rosemary. As you can see on the packaging, there are a few beer pairing suggestions. 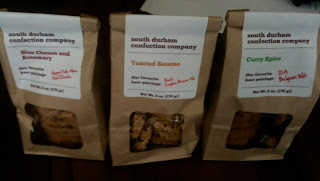 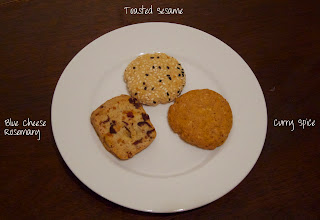 These cookies are like biscuits, or as I like to call them, Grown Up Cookies.  They are not overly sweet and there are complex flavors that mingle savory, sweet, spicy, and bitter.
Curry Spice 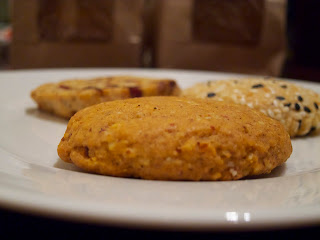 The Curry Spice cookie had a strong cumin/clove aroma which made me expect a savory biscuit.  Instead, this cookie was sweet and spicy, like eating homemade pumpkin/zuchini bread.  The cinnamon and black peppercorn add a spicy zing, which nicely lingers on the palate even after I washed it down with Dupont Moinette Blonde. This was a true pairing; the garam masala spices enhanced the clove flavors in the Belgian blonde.

When I paired this cookie with the Ballast Point Sculpin IPA, the spiciness washed down well.  This pairing created a sensation similar to drinking IPA with savory spicy food without the grease and salt. 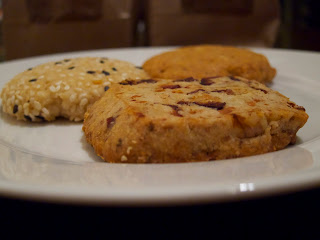 With the Blue Cheese and Rosemary cookie, the cheese is mild and not sour.  With the Sculpin IPA, the extreme flavors of cheese and hoppiness are mellowed.  I paired this with the 2011 Symposium New Albion Porter that I had leftover from this year's Craft Brewer's Conference. With the porter, the flavors in the cookie didn't change much.  It was a nice pairing; like having a morning cup of coffee with a sweet and savory scone. 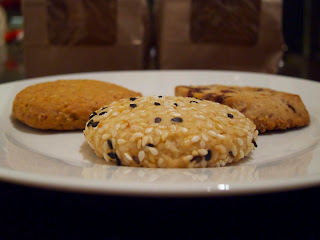 This is the mildest and least extreme of all the cookies.  This does not mean that it is boring. The cookie is sweet and nutty. I could eat it every day and serve it to unadventurous guests. The sweetness from the sesame cookie matched with the sweetness of the New Albion Porter. The nutty toastiness matched with the Big Boss Bad Penny dark brown ale that I carried home from N.C.

Posted by Bottle Chasers at 9:10 PM No comments:

You can tell by the beer styles and location where people are drinking that summer is coming.  This season is synonymous with refreshing ales, concerts, and outdoor dining. Check it out! 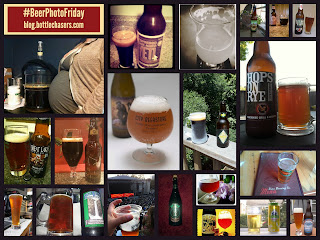 Fullsteam Brewery: Crafting Beer and Business in the South

I have long planned to be in Durham in May 2011 for Duke's Graduation weekend so I was happy to swing by Fullsteam Brewery and get a quick tasting. David at Beer47 arranged for a tour of Fullsteam so I'm looking forward to his photo's and tasting notes. Unfortunately, I don't have any photo's of my own.  I was having too much fun soaking up the atmosphere.

Sean Lilly Wilson and his team have built up a business that takes advantage of the local styles and flavors, including their flagship Southern Lager and First Frost winter perssimmon ale that they foraged from local abandoned orchards.  Fullsteam also has a beer called Working Man's Lunch, named after a Southern tradition, consisting of an RC Cola and a Moon Pie.  Wilson likes to play with the palate. He had us try his Working Man's Lunch beer with a Moon Pie, which he sells at the bar so that customers can enjoy this combination.  It's so funny how this unexpected combination - which I might expect to see in a stoner movie - works.  Moon Pie's are mildly sweet and the beer washes it down well.  Even if you try the beer first and then the Moon Pie, you get a different, but pleasant, reaction on the palate.

Fullsteam's Forager program illustrates that their beer is art.  This is beer brewed with ingredients harvested from the local community. They aggregate harvests from a variety of sources, balance the flavors, and  produce a solidly enjoyable product. For past programs, people brought in their persimmons or pears and, in return, received market price for their harvest, an exclusive Forager hat, and a sample of the final product. If the forager chooses not to take the money, Fullsteam donates the proceeds to a local community garden program called SEEDS.

The Fullsteam tavern is a spacious, comfortable space that regularly has food trucks and live bands dropping by. As we walked up to the building, a man, with what appeared to be his son, was at the picnic tables having a sausage lunch from the Farmhand Food Sausage Wagon.  I liked the family-friendly feel of this place. They even have a weekly running club that meets Wednesdays for a pre-beer run.   On a Friday afternoon, it was quiet, but I struck up a conversation with some really friendly people sitting at the bar.

The first friend I made was one of the owners of Scratch Bakery, which specializes in local, seasonal food. This means they don't have American standards like apple pie until it's apple season because they insist that their ingredients be fresh.  I checked out the bakery for brunch a few days later.  It's on a pedestrian street and has very delicious, fresh food!  I tried the fried bologna sandwich, the strawberry rhubarb pie, the donut muffin, and the biscuit sandwich.  I highly recommend this bakery the next your in town.

The next person I chatted with has been a Durham local for a few decades.  He told me that there was a time when he wouldn't have wandered into that neighborhood so freely.  Even though you could see the original baseball field where the Durham Bulls played until 1994 (and where the movie Bull Durham was filmed), you could tell that the neighborhood was being gentrified.  The area was surrounded by low-income housing that had been boarded up. Still, the Raleigh-Durham area is transforming, whether it's from the technology and research coming out of the surrounding universities (Duke, UNC, NC State) or the people who grew up in the area and understand the value of having a business in this community.

It's funny that while I was in my globally-focused business school program, one of my core classes made us run around cities like Dubai, New Delhi, and Shanghai to interview locals about business opportunities in that region; yet we were not required to do the same assignment when we got to Durham, NC. I could have written pages about business in Durham and a decent video with meaningful interviews to go with it, too.


You can click here to read about Fullsteam's lobbying efforts that led to state policy changes for North Carolina.
Posted by Bottle Chasers at 11:04 AM No comments:

In this week's Beer Photo Friday,  I was excited to see people taking advantage of the beer events that are becoming so common these days. 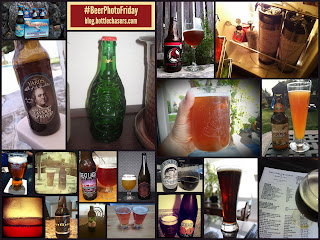 1. Philly Beer Week
@bagofsongs was drinking a Yards Poor Richard's Tavern Spruce for Philly Beer Week.  Philly Beer Week has only been around since 2008, but it's the event that kicked off all of these Beer Weeks in America: San Francisco, Seattle, San Diego, Chicago, New York, Sacramento, Los Angeles.  Click here for a full schedule of this week's events.  Don't be surprised if I spontaneously jump on a cross-country plane to join in on the festivities.  I've been known to do that.

2.  The New Tasting Room at Green Flash
I was jealous that @TailgatingTimes was tweeting from the grand opening of  Green Flash's new tasting room in Mira Mesa, CA. This new tasting room boasts 4000 square feet, 30 taps, and a Beer Garden in the warm San Diego climate.