On February 11, 2011, the SF Beer Week Opening Gala kicked off SF Beer Week.  Hosted in the Yerba Buena Center for the Arts, this ticketed event featured over 35 Northern California Breweries. This was a successful event that highlighted outstanding craft breweries and demonstrated extraordinary enthusiasm for craft beer. Unfortunately, there were miscommunication about the capacity of the venue among the event planners, the venue, and the SF fire marshall.  Furthermore, I have a few suggestions for what could have made this event more comfortable for people who attended the event.

This morning, I received this email from the Gala organizers briefly explaining  the misunderstanding and that they will refund ticketed individuals who were not admitted to the event.


I commend the organizers for acknowledging the capacity issues and rectifying the situation for people with tickets who were turned away.  Events like these are a lot of work to organize and even if they achieve the difficult task of breaking-even, they make very little profit.  These events celebrate craft beer for the sake of celebrating craft beer.

I was happy to discover at least three new breweries: Almanac Beer Co., Cherry Voodoo, and High Water Brewing.  Talking with the brewers offers fascinating insight into their passion and the beer-making process.  The two beers that stood out on my palate were Almanac Summer 2010 and Social Kitchen's White Thai Affair stood out on my palate as beers that used unique and unexpected ingredients to make well-crafted beers.  I learned from Jesse Friedman at Almanac that he had to make several small-batch iterations of Summer 2010 to understand that he had to use over 250 pounds of blackberries. Since blackberries have such a short season, he had to work quickly.  Jesse captures beer as a labor of love.

Unfortunately, I was incredibly hung over the next day; so much that I was almost afraid to attend another SF Beer Event.  As I met more people on Sunday who were still recovering, I think the event that could have added a few more details that could have made this a more enjoyable experience.

1. More Water in More Places
This was my first Opening Gala, however, everyone I met who had previously attended this event complained that there was not enough water available at previous gala's.  Being hydrated would have helped mitigate over-consumption and my hangover.

2. Smaller Glasses
I suggest having glasses that accomodate a one ounce serving.  This may be controversial since most people want more beer.  However, with over 35 brewers offering and average of 3 beers each, a  1-ounce serving is plenty of beer to get a tasting.  If you get just one sampling from every brewery, that's over 35 ounces of beer, many of which had over 7% ABV.

3. More Food
The food choices were delicious and having food available on the back patio was a nice touch on such a clear day.  Early in the evening, I had a few sausages and (melt-in-your-mouth) chicharonnes from 4505 meats.  However, I would have appreciated more food choices so that I would be more encouraged to eat and less turned-off by the long lines for food. 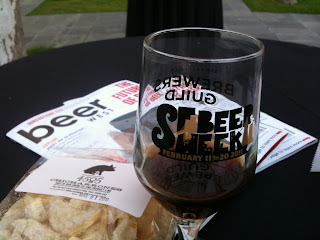 While everyone attending these events are adults who should be able to take care of themselves and self-regulate, it becomes more complicated with that much free-flowing beer.  Event organizers need to design the event so that things such water, food, and portion-control are no-brainers.
Posted by Bottle Chasers at 3:30 PM