My Search for a New Drink: Beer Cocktails

This year, the Kentucky Derby is Saturday, May 7.  With only a one day reprieve between Cinco de Mayo and the Derby, what's a serious  - but responsible - drinker to do to keep things fresh and creative?  The mint julep is as iconic to the event as big, audacious hats but I'm in search of something new. 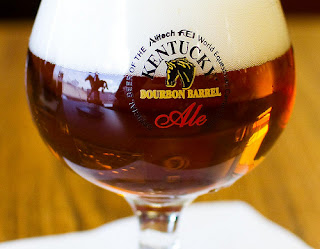 At first, I thought I might get some beers aged in Kentucky bourbon barrels. My friend, JR, enticed me with his photo (above) of Kentucky Bourbon Barrel Ale from Lexington Brewing Company. Check out the horse reflection in the glass! He raved that it was amazing because it actually tastes like bourbon.  Unfortunately, this ale - like Founders Kentucky Bourbon Breakfast - is not distributed in my region. Alternatively, I could go with my barrel-aged tried-and-trues like Oskar Blues Ten Fidy, but I wanted to see what else was out there.

So I went off in a different direction: beer cocktails. Ever since I was at a Japanese restaurant earlier this year and put a splash of yuzu wine into my Asahi Super Dry, I've been intrigued by what could reasonably be mixed with beer. Beer cocktails are becoming a growing trend. LA Weekly posted a list of places to get a beer cocktail in LA. As I further explored beer cocktails for the Kentucky Derby, I went to some unexpectedly odd places. The Bourbon Blog seemed promising when I found the post about the Beer, Bourbon, and BBQ Cocktail.  You can watch an 8 minute video of them creating their recipe:


It's fun to watch these guys go through the process of the creating a cocktail with such unusual ingredients, namely BBQ sauce and honey-infused bourbon. However, based on their final reaction at 7:01, I was not thoroughly convinced that they had created a palatable cocktail.

Finally, I found some appetizing recipes on StarChefs.com for DIY beer cocktails that (1) had more than two ingredients and (2) didn't require me to buy things for my liquor cabinet that I would use only once (i.e. pineapple-infused mezcal or celery bitters). While these recipes don't have bourbon, these would be refreshing drinks to enjoy during an afternoon with friends.

Posted by Bottle Chasers at 7:29 AM