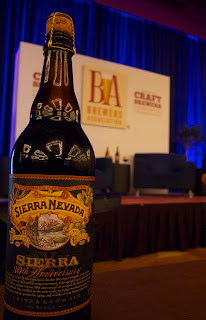 The 2011 Craft Brewers Conference in San Francisco kicked off with a POP! (literally) as we toasted to craft beer with Fritz Maytag of Anchor Brewing and Ken Grossman of Sierra Nevada Brewing Co. This is the first beer industry conference that I've attended so it's the first time that I've checked in at a conference registration and been handed a four-pack of craft beer with by packet. Still, there was work to be done and new ideas to explore in the midst of this explosive time in craft beer.

Pairing Food and Beer
There was a lively discussion about beer and food at the "Working with Chefs" panel, which featured Adam Dulye of The Monk's Kettle, Greg Koch of Stone Brewing Co.,  and Jared Rouben of Goose Island Brewpubs.

The past two years have seen the envelope pushed beyond the conventional pairing of beer and food. Porters and stouts are no longer just for desserts. Progressive brewpubs are trying break the expected standard of designing the meal from light to heavier. Instead, the panel advised brewers to start with a cleaner slate of possibilities. Afterall, the biggest wins in food pairing come from trying new things that you have never imagined. For example, multiple beers with one course causes different actions on the palate so that diner is constantly engaged throughout the course. As a result, portion control is a topic that needs to be discussed when planning the meal since you want to ensure that the diner can finish the course by washing down the flavors on the palate with a beer.

The panel tried to dispel the myth that the chef creates the food and then finds a suitable beer. Instead, the process should be collaborative. 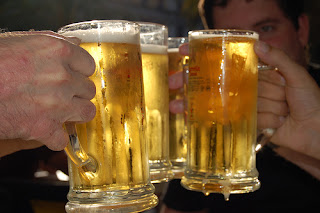 There seems to be a common communication divide between the brewer and the chef as I often heard brewers ask, "What kind of language should I use when discussing this issue with the chef?" To that, the panel offered business-saavy advice: set a price for the dinner and say that you still want to make money.