My Day with Pliny the Younger 2011

Friday, February 4, 2011 was the day I transformed into a true a beer fanatic. It was the first day that Russian River Brewing Company released its 2011 Pliny the Younger at its brewpub. I wanted to taste a beer that ratebeer ranked as one of the best beers in the U.S.

8:30am - Temptation
I figured that if I left San Francisco around 9am, I would have plenty of time to get into RRBC for an early lunch. I was confident that this little trip will only take me a few hours - including driving. 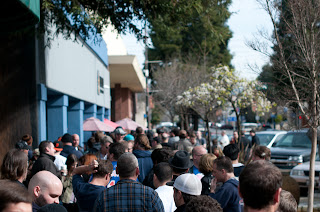 9:45am - Damnation
David and I arrived in Santa Rosa and got in line.  My cursory head-count estimated that there were about 110 people in front of us.  Slowly, slowly, the line moved ahead as the doorman for the brewpub let people in only when people left.  It was highly conceivable that people planed to camp out at the bar all day. Damn!

11am - Salvation
We were still towards the end of the line, but ready for the early lunch that I had planned. We were conveniently in front of the Ting Hau Restaurant so we picked up some Chinese food plates while we stood in line.  The woman in the restaurant was incredibly sweet and brought us extra napkins when she realized that we were eating while standing right in front of her restaurant.


11:45am - Deification
I moved the car to a different parking zone. At this point, I’m not sure if or when we are getting in or whether there will be enough beer in RRBC’s daily allocation of Pliny the Younger.  I watched people drop out of the line after they realized that there was at least another hour of waiting ahead.  Was I deifying this beer?


12:45am - Redemption
We were wrist-banded and allowed in! It was a bit of a madhouse inside, but we found two seats at the bar. 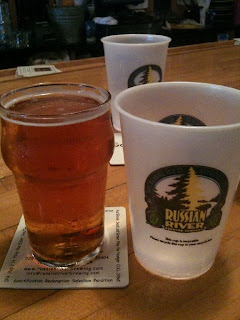 Ok, this is a solid triple IPA.  It’s smooth from the first sip with sweet/spicy hops that invigorate the tongue. Unfortunately, there were a couple plates of chicken wings and calzone around me so I was not able to catch the aroma.


I quickly made two friends, Chris and Mike, at the bar.  Mike was a local to Santa Rosa and shared his chaotic Younger stories from last year.  This year, RRBC managed the crowd so there weren’t people with growlers pushing and climbing over each other at the bar. As Mike went through his thoughts of each of the beers on the chalkboard, he shared the April Fool’s Day joke that the brewpub pulled a few years ago.  Procrastination beer was on the menu for a long time with the note “Coming Soon!” as a joke.  One year, on April 1, RRBC posted on their website that Procrastination was on tap in the brewpub.  It turns out that some people drove over 8 hours to Santa Rosa to try this beer.  You have to admit that RRBC is very good with hyping their beers.

Chris flew in for the weekend from Chicago just to try Pliny the Younger. He exclaimed that Younger was fantastic....although he was already on his fourth 11% ABV beer when he said it. You gotta love beer geeks.  Everyone I met was in a great mood. I even received a declaration of love from my new friends when I left.


3pm - Sanctification
I only had time and the drinking capacity for one beer since I had to drive home, so we left at 3pm. Overall, the Pliny the Younger is delicious. I even had the opportunity to try it again at Monk’s Kettle late one night a few weeks later.  I’m glad that I got to try it at the RRBC, but I don’t think that I'll spend another day waiting in line for it.  The hype didn’t exactly live up to the expectation.  In order for this beer to live up to it’s expectation, my drinking experience would have to have been like this scene from Beerfest:


My current beer quest is to find other IPA’s that are just as tasty and easier to access.  So far, Ballast Point Sculpin IPA and Firestone Walker Double Jack IPA fit the bill: smooth from the first sip and very hoppy.
Thanks to David Jensen of www.beer47.com for the picture of the line outside of RRBC.
Posted by Bottle Chasers at 2:09 PM